With millennia of history and culture, Sri Lanka beckons to the world traveler to come discover its many beauties. The verdant green of lush grass, the majestic trees, the sprawling countryside, and the friendly populace have stories to tell that you will not hear anywhere else. Discover rich diversity in the span of a few hours.

Travel from the northern point to the southern point or from the west to the east, and see the differences not only in the scenery but in the people. The tiny island in the Indian Ocean has greeted many a discoverer and those who visit the country go away with a feeling of leaving paradise, and many return again and again to experience Sri Lankan hospitality.

Sri Lanka is a free, independent and sovereign nation with a population of 20,926,315 (July 2007 est.). Legislative power is exercised by a Parliament, elected by universal franchise on proportional representation basis. A President, who is also elected by the people, exercises executive power inclusive of defence. Sri Lanka enjoys a multi party system, and the people vote to elect a new government every six years.

An island off the south-eastern cost shores of India, 880 km north of the equator, in the Indian Ocean. 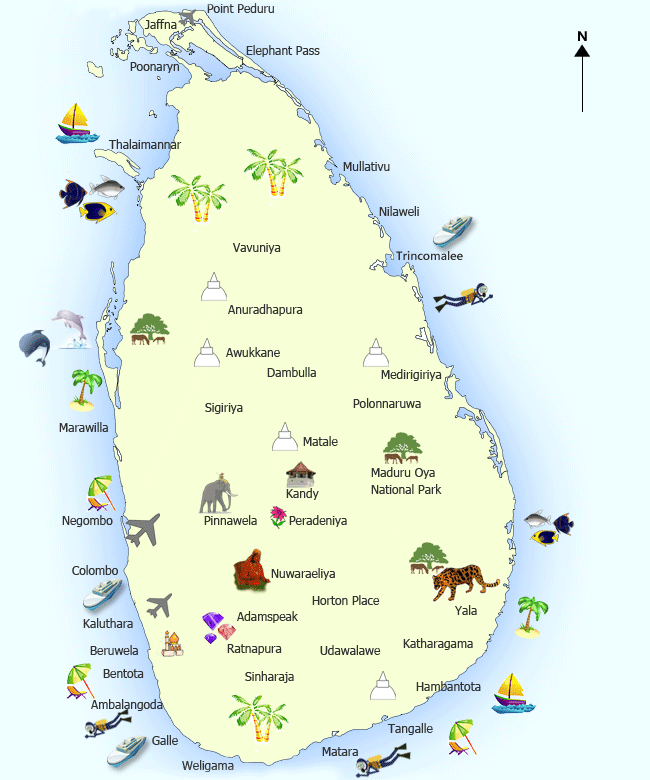 Low Lands - tropical, average 27C Central Hills - cooler, with temperatures dropping to 14C. The south-west monsoon brings rain to the western, southern and central regions from May to July, while the north-eastern monsoon is from December to January. Sri Lanka climate is ideal for holiday-makers throughout the year.

Sinhala, Tamil and English are widely spoken throughout Sri Lanka, with the exception of remote villages where it might be Sinhala only or Tamil only.